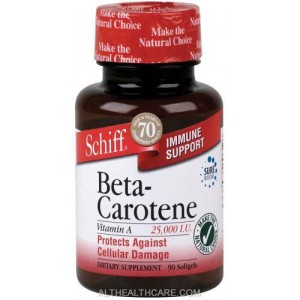 Throughout Middle Age May Benefit The Aging Brain

A recent study of people taking beta-carotene supplements analyzing the key potential benefits against cognitive decline demonstrates there are ways, through basic “health-minded” lifestyle modifications, that proper nutritional intake can help memory as people get older.

Most importantly, the findings also suggest beta-carotene may help keep the brain sharp if taken regularly as a supplement for many years.

Results of the placebo-controlled study of 5,956 men were published in the Archives of Internal Medicine. Researchers from Brigham and Women’s Hospital in Boston reported that men who took beta–carotene supplements every other day for an average 18 years scored much better in cognitive testing than those taking a placebo.

They scored especially well on verbal memory. However, those in a shorter-term test who averaged only one year of supplementation, did not demonstrate a similar benefit.

“Men who took beta-carotene for a mean of 18 years had about the same degree of cognitive function as men one year younger,” the researchers explained. “In other words, if you take beta-carotene for 18 years, you delay cognitive aging for about one year.”

They also said that women would likely see a similar long-term benefit. The researchers suggested that beta carotene might help delay the effects of aging on cognitive abilities by counter-acting oxidative damage in the brain.

The long-term group in the study included 4,052 participants in the Physicians Health Study who began taking supplements or placebo in 1982. Between 1998 and 2001, an additional 1,904 men were randomly assigned to one of the two groups.

Both groups were followed through 2003, completing yearly questionnaires about their health and their compliance with taking the supplement. The men were assessed  for cognitive function at least once between 1998 and 2002, then evaluated at the study’s conclusion using a set of five cognitive tests.

Beta-carotene’s benefits against the ravages of cognitive decline surpassed those of other medications tested in healthy older people, making it worthy of continued study.

Journal Reference:
Brigham and Women’s Hospital Boston, MA
This article is for informational and educational
purposes only;  It is not intended to provide medical advice, diagnosis or treatment.
Consult your doctor or healthcare professional.

According to a new study conducted by researchers at the Ruhr-Universität Bochum in Germany, psychological stress may increase the risk of mental and physical illness by altering the control of genes.

The research demonstrates that stress actually alters the methylation of DNA as a result of the activity of certain genes. The team investigated specific genes already known to be involved with controlling stress.

Previous studies on the effects of stress have shown that early psychological trauma and highly stressful events are linked to long-term methylation changes to DNA.  With this new study, the team research scientists sought to understand if the DNA alteration also occurs after acute psychological stress, such as the type of stress a person normally experiences during a job interview.

For the study, they examined two specific genes: one for the oxytocin receptor (OXTR) and one for the nerve growth factor brain-derived
neurotrophic factor (BDNF).

To differentiate, OXTR acts as a “docking site” for oxytocin, the chemical messenger known as the “love” or “trust” hormone. By contrast, BDNF functions in the development of brain cells.

The researchers recruited 76 participants (ages 60 – 69 ) to experience two kinds of stressful events. The first was to to take part in a mock job interview, and the other was to solve math problems while being watched.
Both of these tests are commonly used to
produce stress under controlled analytical laboratory environment.

The subjects gave blood samples before the tests, and twice afterwards: one ten minutes after the test (post-test) and another 1 and 1/2 hours after (follow-up). The researchers could measure the amount of DNA methylation in the two genes
from these samples.

The results showed that the BDNF (brain development) gene was not affected by the stress tests. Interestingly however, the OXTR gene showed measurable methylation changes.
There was an increase in methylation in a section of this gene in the post-test measure. This result suggests the cells formed fewer receptors.

Then in the follow-up blood sample, 1.5  hours after the test, methylation in the OXTR gene fell below the pre-test level, which suggests that the cells produced too many receptors.

“The results suggest a dynamic regulation of DNA methylation in OXTR , which may in part reflect changes in blood cell composition, but not BDNF after acute psychosocial stress,” reported the study’s authors.
“Epigenetic changes may well be an important link between stress and chronic diseases,” commented Dr. Gunther Meinlschmidt, professor and head of the Research Department of Psychobiology, Psychosomatics and Psychotherapy at the LWL University Hospital in Universität Bochum  University.
“We hope to identify more complex epigenetic stress patterns in future and thus to be able to determine the associated risk of disease. This could provide information on new approaches to treatment and prevention,” he added.

Story Source:
Ruhr-Universität Bochum  University. Bochum Germany.
Journal Reference: The research is published in the journal Translational Psychiatry.
This article is for informational and educational
purposes only;  It is not intended to provide
medical advice, diagnosis or treatment.
Consult your doctor or healthcare professional.

Not All Coconut Oil Products

Don’t select coconut oil products from hydrogenated oil or oil that has been treated with heat, solvents, or bleach.

Coconut Oil Is Recognized For

According to a 2009 study from the journal “Lipids.” consuming coconut oil may help fight excess abdominal obesity. For 12 weeks, 40 women with excess belly fat were placed on a diet, and instructed to exercise each day; They were given daily supplements containing either soybean oil or coconut oil.  Although participants of both groups lost weight, women taking the coconut oil capsules demonstrated a greater decrease in their waistline measurements.

Tests on laboratory subjects indicate that intake of  coconut oil with conjugated linoleic acid (CLA) may assist in promoting loss of body fat.

A diet rich in soy and whey protein, found in products such as soy milk and low-fat yogurt, has been shown to reduce breast cancer incidence in rats. (Photo credit: Wikipedia)

healthy weight is good for your brain…

Eating a healthy diet and maintaining a normal weight helps protect your brain, according to a 10-year study of 6,401 British civil servants.

Participants in the study (initially ages 39-63) were less likely to have impaired cognitive function if they were not overweight or obese.

In followup mental testing at the 5 and 10-year points, those who were both obese and “metabolically abnormal” were significantly more likely to show a faster rate of cognitive decline.

Researchers speculated that vascular problems associated with unhealthy weight might affect brain function, along with specific fat-related secretions that impact the aging brain.

Journal Reference: Neurology
This article is for informational and educational purposes only;  It is not intended to provide medical advice, diagnosis or treatment. Consult your doctor or healthcare professional.